Technical cleanliness plays an important role, especially in areas where components are manufactured, such as electrical engineering or the automotive industry. If contamination occurs at particle-sensitive points, this can quickly lead to functional impairments or even malfunctions. If the residual dirt in a system is so low that no damage occurs, it is considered technically clean.

Technical cleanliness is particularly important in the following sectors:

Thanks to technological progress, many industries require increasingly complex systems. As early as the 1990s, there was an increase in damage caused by contamination on components in the automotive industry. It quickly became clear that procedures had to be standardized. The so-called "VDA 19 Guideline", also known as "Testing of Technical Cleanliness – Particle Contamination of Functionally Relevant Automotive Parts", was published in 2004 and revised in 2015 as VDA 19 Part 1. At the international level, ISO 16232 (2007) forms the standard set of regulations. VDA 19 Part 2 from 2010 contains a guideline of rules for cleanliness-relevant orientation of assembly production.

VDA 19 Part 1 precisely defines various types of contamination. With the help of these definitions, contamination can be detected by cleanliness analyses and other technical cleanliness processes and appropriate decisions can be made. The aim is to preventively avoid residual dirt on components.

Suppliers, manufacturers and end users expect constantly higher quality standards. Therefore, an innovatively designed cleanliness process is essential to exclude any contamination of functionally relevant parts and components throughout the production process. ZEISS solutions for technical cleanliness identify the root cause of contamination and enable to make the right decision more quickly.

How do you identify the root cause? ZEISS Technical Cleanliness Solutions

Particle contamination is the enemy of efficiency, functionality and longevity of any product. For example, research has shown that the main source of failure in hydraulic and oil-filled systems is due to particulate contamination. Oil analysis helps minimize maintenance costs and improve machine uptime.

ZEISS Technical Cleanliness Solutions were developed in collaboration with automotive manufacturers and suppliers. They had specific requirements for high-performance particle identification and characterization systems that are easy and intuitive to use.

As a result, ZEISS solutions are easy to use, can be deployed in multiple locations and in any manufacturing or industrial environment, and can be applied by users who are not microscopy experts.

In order to create cleanliness reports with all relevant data in one work step ZEISS microscopes and HYDAC extraction instruments are able to exchange data in a seamless workflow into one report for more productivity.
Learn all about how ZEISS integrates data from HYDAC devices into reporting in our magazine. A success story of technical cleanliness for the automotive industry.

Particles in oil and lubricants

Particles in syringes and implants

In addition to the quantification of particles and the measurement of their size, the standards for technical cleanliness also require a differentiation between metallic-glossy and non-glossy particles. Conventional methods can only make this distinction by scanning the filter membrane twice, each time with different polarizer and analyzer orientations. With the award-winning ZEISS One-Scan Technology, this is now possible with just one scan - reducing the time-to-result by up to 50 percent. In March 2021, the Fraunhofer Institute for Manufacturing Engineering and Automation (IPA) awarded ZEISS with its One-Scan Technology first place in the REINER! Fraunhofer Purity Technology Award.

Technical cleanliness is part of the ZEN core software portfolio from the industrial microscopy sector. To optimize particle classification, ZEISS now offers ZEISS ZEN core users the Technical Cleanliness Analysis („TCA“) solution with three pre-trained modules based on machine learning. This module offers the functionality to classify particles based on measured parameters of an analyzed image. Samples are analyzed via three pre-trained machine learning models which can be additionally trained by users & customers. Samples are analyzed via gray scale determination and the pre-trained Machine Learning model for object classification runs in the background in the new TCA job templates, while the type classification is checked in parallel, based on the existing particle measurement results. This additional check of the type classification via machine learning algorithms „looks at” the particle results obtained with the classical analysis for size, shape, intensity and type classification, among others, and combines the various features into a large number of uncorrelated decision trees. The results are evaluated individually for each decision tree using the classification trained to the object classification model. The result is an automatic prediction of the particle type.

Particle Image with and without object classification in comaprison: e.g. with 10 samples this means a potential time saving of 3.5 hours/day.

The ZEISS portfolio enables combined particle detection and classification in a highly efficient workflow that not only finds particles, but also classifies them according to the origin of the contamination.

With ZEISS, you can combine data from light and electron microscopes in a single work process to obtain additional information. In this way, obtain well-founded insights into the cause of contamination.

Itemize particles by quantity, size distribution and morphology, and distinguish metallic from non-metallic particles and fibers down to 2 μm. Create cleanliness reports according to industry standards.

Your benefits of industrial metrology solutions from ZEISS: 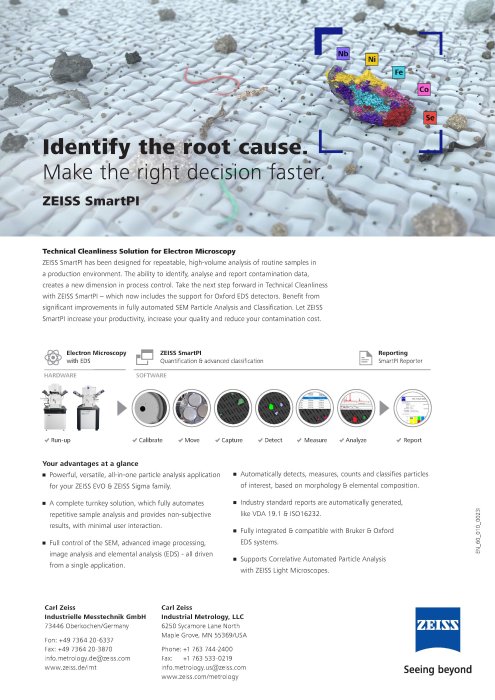 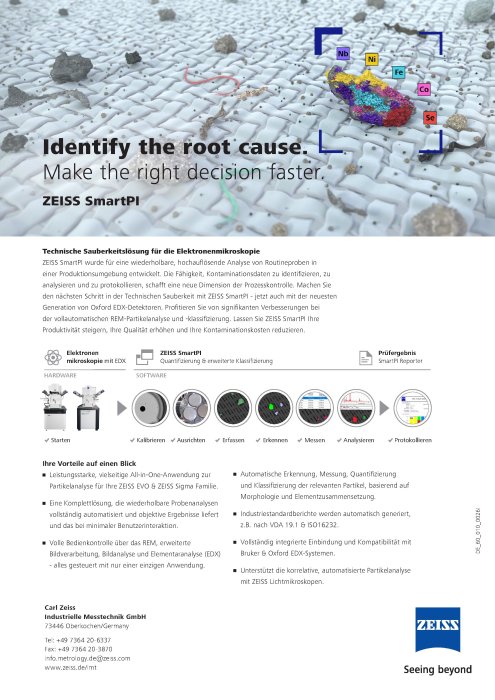